So You Want to Be a Cowboy 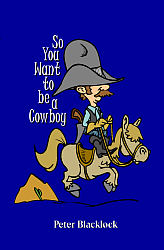 The cowboy tradition in the Americas began with the arrival in the 16th century of Spanish conquistadors and settlers who first brought their cattle-raising traditions to Mexico and Florida. These settlers also brought with them Spanish longhorn cattle and domesticated horses, which had been extinct in the Americas since the Ice Age. Even the present day wild mustang is a descendant of these Spanish horses.

The work of a cowboy usually involved herding cattle and watching the cattle at night to prevent stampedes and theft during cattle drives. Cowboys wore cowboy hats to shield their heads from the sun and overhanging brush; a bandanna to mask their faces in dust storms and to wipe away sweat; cowboy boots with pointed toes to help guide their feet into the stirrup and heels to keep their feet from slipping out of the stirrup; and blue jeans or sturdy canvas trousers to protect their legs.

By the 1880s, barbed wire fencing became the standard in the northern plains as railroads expanded to cover most of the United States and meat packing plants were built closer to major ranching areas. Thus, the era of the open range and long cattle drives ended. Today the cowboy tradition exists throughout North and South America, Australia, and even Hawaii.