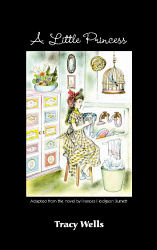 English writer Frances Hodgson Burnett is best known for her children’s novels, The Secret Garden, Little Lord Fauntleroy, and A Little Princess. She was born in Manchester, England, and had two older brothers and two younger sisters. After her father died, Burnett was cared for by her grandmother, who taught her a love a books. Considered precocious and imaginative, Burnett attended The Select Seminary for Young Ladies and Gentlemen in Manchester. As a child, Burnett enjoyed telling stories to family and friends and wrote stories down in notebooks. In 1863, Burnett’s education came to an end when her mother was forced to sell the family business and the family moved to Knoxville, TN, where Burnett’s uncle lived. With the publication of Little Lord Fauntleroy in 1886, Burnett became a popular writer of children’s books. A Little Princess first appeared as a serialized magazine story in 1888 and was later published as a novel in 1905. Since then, the story has been adapted numerous times for the stage, television, and film.