Ashipattle and the Giant Sea Serpent: A Musical! 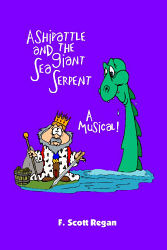 King Oswald (604-642) was the son of King Æthelfrith, who fought against the English and was killed in battle. After King Æthelfrith’s death, Oswald fled to Scotland, where he lived in exile and converted to Christianity. King Oswald later became the most powerful ruler in Britain and reigned over Northumbria for eight years from 634 until he died in the battled of Maserfield in 642. King Oswald had a reputation for being generous to the poor and is credited with bringing together two Northumbrian kingdoms and promoting the spread of Christianity. King Oswald was later named a saint.