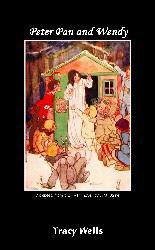 The Peter Pan character first appeared in J. M. Barrie’s 1902 novel The Little White Bird, which is based on Barrie’s friendship with Sylvia Llewelyn Davies, a widow, and her sons. After the death of Llewelyn Davies, Barrie was named the co-guardian and unofficially adopted the boys. The characters of Peter Pan, the Lost Boys, and the Darling boys are thought to be inspired by the Davies boys and originated from the stories Barrie created for them. John Darling is named after John “Jack” Llewelyn Davies, and Michael Darling is named after Michael Llewelyn Davies. Barrie’s inspiration for creating a boy who never grows up may stem from a tragic incident in which Barrie’s elder brother was killed at age 14 in a skating accident, at which time Barrie’s mother took comfort in the fact that her dead son would forever remain a boy.