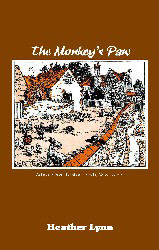 English author William Wymark Jacobs is best known for his horror stories “The Monkey’s Paw” (1902) and “The Toll House” (1909), though most of his works are humorous. Jacobs was born in London and his mother died when he was a young boy. His father worked as a wharf manager and the family had little money. After his first short story collection Many Cargoes was published in 1896, Jacobs was able to quit his job as a civil service clerk. He married Agnes Eleanor in 1900 and the couple had five children. Jacobs published 13 collections of short stories, six novels, and wrote several one-act plays.