All Through the Houze 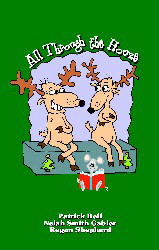 “’Twas the Night Before Christmas” is the first line of the poem “A Visit from St. Nicholas,” which was written by Clement Clarke Moore, a professor of Oriental and Greek Literature who had grown up in Queens. The poem was first published in the Sentinel in Troy, NY, on Dec. 23, 1823. Many modern depictions of Santa Claus are attributed to this poem including use of a sleigh, the names of the eight flying reindeer, the tradition of delivering toys to children, his arrival on Christmas Eve instead of Christmas Day, and his physical appearance, which was reportedly inspired by a local Dutch handyman with which Moore was acquainted.
“His eyes―how they twinkled! His dimples: how merry,
His cheeks were like roses, his nose like a cherry;
His droll little mouth was drawn up like a bow,
And the beard of his chin was white as the snow;
The stump of a pipe he held tight in his teeth,
And the smoke it encircled his head like a wreath.
He had a broad face, and a little round belly
That shook when he laugh’d, like a bowl full of jelly:
He was chubby and plump, a right jolly old elf”
Today, the poem is considered to be one of the most famous American poems ever written. Four hand-written copies of the poem still exist, with three of the copies housed in museums.