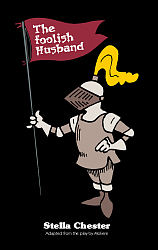 Molière is the stage name of Jean-Baptiste Poquelin (1622-1673), who was born in Paris to a wealthy family. One of the greatest comedic playwrights of all time, Molière worked as an actor and used this experience to hone his comedic talent in which he combined elements of French comedy with the Italian commedia dell’arte to satirize French society. Molière’s 1660 play, The Imaginary Cuckold (Sganarelle, ou Le Cocu Imaginaire), is the first play in his “jealousy series,” which includes Don Garcia of Navarre, The School for Husbands, and The School for Wives. While playing the role of the hypochondriac Argan in his play The Imaginary Invalid, Molière experienced a coughing fit onstage, managed to finish the performance, but collapsed and died hours later. French law at the time prohibited actors from being buried in cemeteries, but the King granted Molière a night funeral and a burial plot in an area of the cemetery where unbaptized infants were buried. In 1817, Molière’s remains were transferred to the Père Lachaise Cemetery in Paris. Some of Molière’s best known plays include The Misanthrope, The School for Wives, Tartuffe, The Imaginary Invalid, and The Miser.