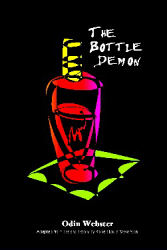 Author Robert Louis Stevenson (1850-1894) was born in Edinburg, Scotland. Stevenson based the “The Bottle Imp” on a German legend and on his 1889 visit to Hawaii. Stevenson set the story in the town of Ho’okena on the Kona coast of the island of Hawaii. The character of Kokua was named after the Hawaiian word “kōkua,” which means “help.” The premise of the story involves a paradox that can be resolved in four ways: 1.) Someone irrationally decides to buy the bottle; 2.) Someone buys the bottle because he believes he is immortal; 3.) Someone buys the bottle, knowingly sacrificing his soul to save another; 4.) Someone buys the bottle because he is destined to go to hell anyway. Stevenson died on the island of Samoa when he was 44 years old and is buried on a spot overlooking the sea. His tombstone reads:
“Under the wide and starry sky,
Dig the grave and let me lie.
Glad did I live and gladly die,
And I laid me down with a will.
This be the verse you grave for me:
Here he lies where he longed to be;
Home is the sailor, home from the sea,
And the hunter home from the hill.”