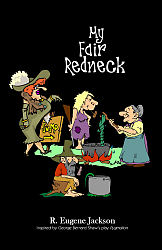 Irish playwright George Bernard Shaw (1856-1950) was born in Dublin. Though his father was an alcoholic and the family lived in poverty, Shaw was introduced to theater by one of his mother’s friends, George John Lee, who was well known in Dublin’s theater circles. Though Shaw wrote many plays in his lifetime, Pygmalion (1912) remains his most popular play. The play’s title refers to Pygmalion, the Greek mythological figure who fell in love with one of his own sculptures. In Pygmalion, Shaw satirizes the rigid English class system of his day. In the play, Henry Higgins, a phonetics professor, makes a bet that he can teach a Cockney flower girl, Eliza Doolittle, how to pass as a duchess just by looking and speaking like one. The play premiered in Vienna in 1913 and opened in London in 1914. The 1956 Broadway musical adaptation by Alan Jay Lerner and Frederick Loewe starred Julie Andrews as Eliza Doolittle and Rex Harrison as Henry Higgins. The 1964 film version, which starred Audrey Hepburn and Rex Harrison, won eight Academy Awards including Best Picture and Best Actor for Harrison.