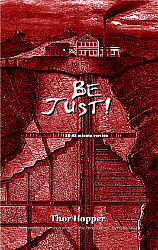 Franz Kafka (1883-1924) is considered one of the most influential writers of the 20th century, though he achieved little literary fame during his lifetime. Born and raised in Prague, Kafka spoke Czech but preferred to write in German. Kafka was the eldest of six children and had a troubled relationship with his father, a domineering and demanding shopkeeper who once worked as a traveling salesman. This father-son conflict deeply influenced much of Kafka’s writing in which he incorporates themes of alienation, cruelty, authoritarian power, and the absurdity of existence. Today, the term “Kafkaesque” is used to describe that which is surreal, nightmarish, and incomprehensibly complex. Kafka earned a law degree but did not practice law. Instead, Kafka worked for an insurance company so that he would have time to write in the evenings. Suffering from tuberculosis and unable to eat due to pain, Kafka died of starvation on June 3, 1924. The rest of Kafka’s family, except for two brothers who died in infancy, died in the Holocaust. Kafka’s most well-known works include his novels The Trial and The Castle, his novella The Metamorphosis, and his short story, “In the Penal Colony,” which was written in October 1914 and published in 1919.