Glance at New York, A 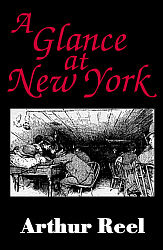 Benjamin A. Baker worked as a volunteer firefighter with Old Engine Co. #15 and as an actor and prompter at the Olympic Theatre. The character of Mose the fireman was based on real-life volunteer firefighter, Moses Humphrey, who worked as a printer at The New York Sun. Mose was a favorite among Bowery audiences, who cheered him on when he trounced his rivals and heroically rescued women and children from fires.