Adapted, Adapted Version of "As You Like It," The 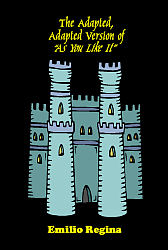 FARCE. When a dimwitted professional wrestler mistakenly ends up at a community theatre instead of a wrestling arena, he is mistaken as an understudy and quickly finds himself on stage performing the role of Charles the Wrestler in Shakespeare’s “As You Like It.” Instead of losing the wrestling match as scripted in the play, Charlie scripts his own wrestling match and handily defeats Orlando with his infamous “Charlie Harse” move. Since Charlie has defeated Orlando, the play takes a major turn as Rosalind must cast her true love Orlando aside in favour of Charlie. As the play heads into a tailspin, the cast wrestles with whether to storm off the stage and go into hiding or adapt to an already adapted, adapted version of the play!

Emilio Regina is an award-winning actor and playwright whose plays have been produced throughout North America. Mr. Regina teaches acting and English at Selkirk Secondary School. He is also the lead singer and harmonica player for the blues band, “The Hollers.” Mr. Regina lives in Kimberley, BC with his wife and son.