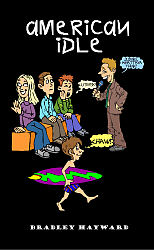 SPOOF. It’s become the latest TV reality show craze! In “American Idle,” contestants vie for the honor of becoming America’s number-one high school slacker. Host Brian Seacrest takes us through rounds of hilarious auditions, mind-bending challenges, and brutal eliminations. Along the way, contestants compete to impress three judges with their supreme slacker skills—an inarticulate school janitor; a nasty, condescending guidance counselor; and a spacey drama teacher. But in the end, the biggest slackers of all may be the TV viewers themselves, who have become too lazy to vote for a winner! This hysterical spoof has a flexible cast and simple staging.