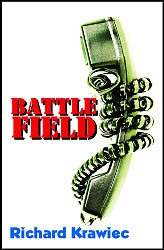 DRAMA. On the surface, Terry’s family appears quite ordinary, but underneath the small talk lies a fierce battle for control. Suffering from schizophrenia, Terry has been committed to a mental hospital, leaving her husband, Joey, to care for their two children. Joey has restricted Terry’s family from visiting her at the hospital. But fearful that family secrets may be exposed, Terry’s mother and brothers contact Terry by telephone to try to convince her to come home. Terry, torn between her family and her husband, soon finds herself on the verge of being swallowed whole by the dark secrets of her past.

Richard Krawiec (pictured with his dog, Stormy) was awarded a creative writing fellowship from the National Endowment for the Arts. Mr. Krawiec also directs the non-profit group, VOICES, which teaches creative writing at homeless shelters, in literacy classes, and in prisons. Mr. Krawiec lives in Raleigh, NC.