Home for Snowflake, A 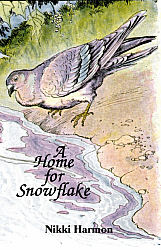 YOUNG AUDIENCES. One day, a young dove named Snowflake encounters a pigeon who tells her of a marvelous land called “New Jersey,” where there’s green grass, trees, birdbaths, birdhouses, and clean air. Snowflake wonders if such a place could really exist, but eager to escape New York and the ill-tempered street magician who keeps her locked in a box, Snowflake sets out on a dangerous journey through the streets of New York to find this fabled land. Along the way, she meets a street-smart dog, a wiley rat, some pet store parakeets, and a homeless cat, who join Snowflake on her quest to find a new home. This heart-warming play will enchant people of all ages. “A Home for Snowflake” is based on the true story of a young dove who was thrown off a roof in New York City and landed on the author’s fire escape. Ms. Harmon rescued Snowflake and cared for her until she could locate a bird sanctuary. Snowflake eventually learned how to fly and now lives with a family in New Jersey.

Nikki Harmon’s plays have been produced in the U.S., Canada, England, and Australia. Ms. Harmon studied at L'Institut Britannique and La Sorbonne and is an alumna of Carnegie Institute of Technology and the Pasadena Playhouse College of Theatre Arts. Ms. Harmon has worked as a stage manager, lighting designer, watercolor artist, and on Earthwatch projects in Kenya, Peru, Italy, Namibia and in the U.S. She is a member of Actor’s Equity and the Dramatists Guild.