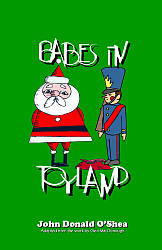 Song Clips
Toyland I
The March of the Toys
If You Really Want to Win the Girl
If We Had No Uncle Barnaby
Barney O'Flynn
I Fear That I Don't Understand
Forest Trees, Who Are These?
Let Us Steal Away
We Won't Be Happy While We're Hungry
From Their Deep, Deathlike Sleep
If You Will Please Follow Me
We Cleverly Affected Our Escape
Toyland II

HOLIDAY MUSICAL. This adaptation of the classic 1903 holiday musical by Glen MacDonough will charm audiences of all ages with its music by Victor Herbert and its 14 fabulous songs including “Toyland” and “March of the Toys.” In order to steal their fortune, villainous lawyer Barnaby Blatherskite drugs Jane and Barney, rolls them up in rugs, and has his bumbling henchmen, Stanley and Oliver, deliver them to the Forest Queen for “disposal.” But Oliver and Stanley decide to double-cross Barnaby, keep the Forest Queen’s $1,000 “disposal” fee for themselves, and dump their human cargo in the Forbidden Forest of No Return. When Jane and Barney awaken in the Forbidden Forest, they encounter the Forest Queen, who has been captured in the evil Spider Captain’s web. Jane and Barney manage to free the Queen before the Spider Captain can eat her. Meanwhile, Barnaby Blatherskite visits Mary Contrary and informs her that Barney is dead and offers his hand in marriage. Frightened, Mary and her brother, Tom, flee to the Forbidden Forest, where they are captured by the Forest Queen’s tree soldiers. Out of gratitude for freeing her from the spider web, the Forest Queen arranges for Barney, Jane, Tom, and Mary to be escorted to Toyland. However, Barnaby Blatherskite and his henchman arrive at Santa’s workshop in Toyland and disguise themselves as toy bag inspectors in order to kidnap Mary. But before the villains can make their escape on Santa’s sleigh, they have to battle a troop of Toy Soldiers.