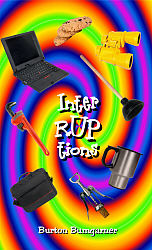 COMEDY. Former high school teacher, Howard Weems, has hit it big writing a series of successful romance novels under the pen name of Ariana Dupre LaRoche. However, while writing his latest novel, “The Mistress of the Yukon,” Howard suddenly suffers from a bad case of writer’s block. Desperate and running out of time, Howard goes to his editor’s home to try to finish his novel so he doesn’t have to go back to teaching language arts. But the day doesn’t start out well when Howard accidentally deletes the first eight chapters of his book and is continually interrupted by a host of visitors including a cantankerous plumber, a homeless woman selling magazines, a nervous pizza delivery person, a Girl Scout, a former graduate student and arsonist, an irate boxer, an overzealous homeowners’ association president, and a religious recruiter. This award-winning play features a strong ensemble cast, a flurry of one-liners, and several opportunities to showcase physical comedy. Winner, Robert J. Pickering Award for Playwriting, 2005.
Winner, McLaren Memorial Comedy Playwriting Competition, 2004.

Burton Bumgarner is an award-winning playwright who has published more than 60 plays. Mr. Bumgarner has experience as a director and a sound and light technician. Mr. Bumgarner resides in North Carolina, where he works as a professional musician.