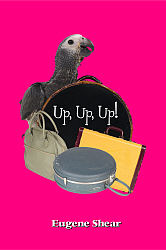 ROMANTIC COMEDY. The laughs never end in this raucous sequel to “The Matchmakers.” It’s one year later and the three Miller brothers and Delacroix sisters meet up again, but this time it’s to get married! But before the wedding nuptials can begin, the three couples have plenty of unfinished business to address. Before Andy can marry his fiancée, he has to face his dead ex-fiancée, an avenging samurai angel who wants to earn her way into heaven’s choir. May, a former actress, has to work through the trauma she experienced while on the set of Mary Poppins. Meanwhile, Tom has to learn to sleep in a bed with May’s African Grey parrot, Richard Burton, who is still grieving the loss of his mate, Elizabeth Taylor. And to prove to his fiancée that he will be faithful, Tex is forced to play the role of Brick from Cat on a Hot Tin Roof!

Eugene Shear is an award-winning playwright with acting and production experience. He draws on his profession of a psychiatric social worker to humorous effect in his comedies. Mr. Shear lives in Concord, NH, with his wife, Deborah, and two cats, Henry and Alice.