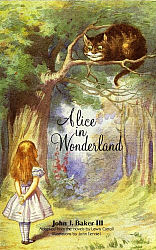 CLASSIC. Adapted from the Lewis Carroll novels Alice’s Adventures in Wonderland and Through the Looking-Glass. Alice spies a white rabbit with a pocket watch and follows him down a rabbit hole into Wonderland. There, Alice meets a mouse, who gives her a lecture on William the Conqueror, and a Dodo bird who conducts a caucus race in which everyone runs around in circles and there is no winner. At the Duchess’s house, Alice meets the Cheshire cat, who warns her that everyone in Wonderland is mad. Alice attends a mad tea party, where the Mad Hatter and March Hare bombard her with riddles. At the Queen of Heart’s garden, Alice encounters gardeners painting white roses red and plays a chaotic game of croquet with the Queen. A Gryphon and Mock Turtle dance to “The Lobster Quadrille.” Feuding brothers, Tweedledee and Tweedledum, recite a poem about a Carpenter and a Walrus. Alice meets Humpty Dumpty who can’t be put back together again, a lion and unicorn fighting for the crown, and a wasp who wears a wig. At the trial of the Knave of Hearts, who has been accused of stealing the Queen’s tarts, Alice refuses to be intimidated when the Queen shouts, “Off with her head!” and suddenly awakens from her Wonderland dream. Includes the lost chapter, “The Wasp in a Wig” and original music for “The Lobster Quadrille.” Suitable for audiences of all ages.