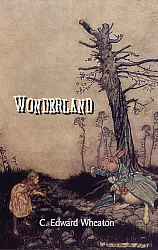 Alice’s Adventures in Wonderland (1865) was written by Oxford mathematician Charles Lutwidge Dodgson (1832-1898) under the pseudonym Lewis Carroll. While rowing a boat up the Thames River, Dodgson entertained three young sisters by telling them the story of the adventures of a bored young girl named Alice. One of the sisters, Alice Liddell, age 10, loved the story so much, she asked Dodgson to write it down for her. Three years later, Dodgson published the tale and it has been in print ever since.