Robin Hood and the Peddler 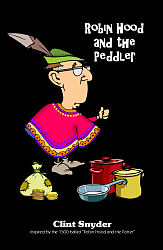 Robin Hood (Robyn Hode) is a medieval folk hero who is described in the earliest existing ballads as a common yeoman who lives in Sherwood Forest with his Merry Men, a band of outlaws. The earliest Robin Hood ballads include “Robin Hood and the Monk” (c. 1450), “A Gest of Robyn Hode” (c. 1475), and “Robin Hood and the Potter” (c. 1503). The phrase “merry man” was originally a term used to describe the follower of an outlaw, knight, or leader. Little John is just one of three Merry Men who were given a name, the other two being William Scarlock, and Much the Miller’s Son. In the 15th century, Nottingham, located in the East Midlands area of England, was known for exporting religious sculptures and had a population of about 3,000. Today, Nottingham is a modern city with a population of more than 300,000. In the 14th century, Nottingham had a sheriff who was in charge of capturing outlaws, preventing hunters from poaching the King’s deer, and securing trade routes through Sherwood Forest. Once a royal hunting forest, Sherwood Forest is now a nature reserve where the annual Robin Hood Festival is held.