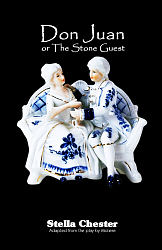 Molière is the stage name of Jean-Baptiste Poquelin (1622-1673), who was born in Paris to a wealthy family. One of the greatest comedic playwrights of all time, Molière worked as an actor and used this experience to hone his comedic talent. The first written version of the Don Juan legend is attributed to Spanish playwright Tirso de Molina who published his play The Trickster of Seville and the Stone Guest in 1630. Molière’s 1665 play Don Juan and the Stone Guest remains one of the best-known depictions of Don Juan. Other famous versions include Mozart’s comic opera, Don Giovanni, and Lord Byron’s 1821 epic poem, Don Juan. Though the storylines differ, the legendary Don Juan is usually portrayed as a wealthy gentleman who takes great pride in seducing women of all ages and classes, thus destroying their family’s honor. Don Juan is part of Molière’s hypocrisy trilogy that includes The School For Wives and Tartuffe.