Pie Piper of Hambaloney, The 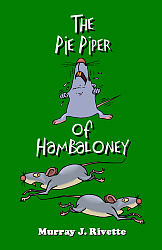 The Pied Piper is first mentioned in a legend from Hamelin, Germany in which a piper that is dressed in multicolored (“pied”) clothing is hired by the town to lure the rats away with his magic pipe. The earliest mention of the legend dates to a stained glass window (1300) located in a church in Hamelin. A watercolor painting by Freiherr Augustin von Moersperg (pictured above) depicts this window, which was destroyed in 1660. It is thought that the window was created to commemorate a tragic historical event when many Hamelin children died or disappeared. The addition of rats to the legend was not added until 1559, and some scholars theorize that the legend could refer to a mass emigration to Eastern Europe in the 13th century, or that an epidemic, a drowning accident, or a landslide lead to the demise of the children.