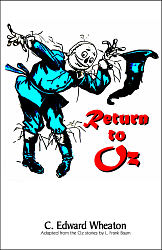 Lyman Frank Baum was born in Chittenango, NY, and grew up on his family’s large estate, where he was the seventh of nine children. Baum did not like his first name, Lyman, so he went by his middle name Frank. Baum was influenced by the Brothers Grimm, Hans Christian Andersen, and Lewis Carroll. Baum’s best-selling children’s novel, The Wonderful Wizard of Oz, was published in 1900. Baum wrote 14 novels set in the Land of Oz as well as numerous short stories, poems, and novels before he died in 1919. Baum’s final book, Glinda of Oz, was published in 1920, one year after his death.