Case of Indigestion, A 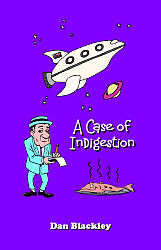 Old Yeller, a 1956 award-winning children’s novel by Fred Gipson, features a stray yellow dog that comes to live with a frontier family in Texas and protects them from wild hogs, a bear, and a rabid wolf.

The science fiction TV series, Star Trek, ran from 1966 to 1969. In it, the crew of the U.S.S. Enterprise travel through the Milky Way exploring planets and alien cultures. At first, TV executives urged Gene Roddenberry, the show’s creator, to get rid of the character Spock because they thought he looked satanic. The stock “redshirt” character―who wears a red shirt and is always killed off―became a fan favorite. Several episodes were set on planets that conveniently look like Earth so that the show could reuse props, costumes, and sets. The episode, “The Trouble with Tribbles,” features small furry aliens that have a penchant for reproducing en masse.