Sacred Dance of Yellow Thunder, The 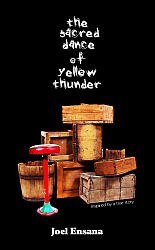 Raymond Yellow Thunder (1921-1972) was an Oglala Lakota, born in Kyle, South Dakota, on the Pine Ridge Indian Reservation. One of seven children, Raymond was born to Jennie and Andrew Yellow Thunder and was the grandson of Chief American Horse. As an adult, Raymond worked as a ranch hand in Gordon, Nebraska. On Feb. 12, 1972, Raymond was kidnapped from a car lot by Leslie and Melvin Hare, Bernard Lutter, and Robert Bayliss, who stripped him of his pants and undergarments, and took him to the American Legion club. An autopsy showed that Yellow Thunder died of blunt trauma to his head. The Hares, Lutter, Bayliss, and Jeanette Thompson were arrested for Raymond’s death and charged with manslaughter and false imprisonment. Leslie Hare was convicted of manslaughter and sentenced to six years and a $500 fine. Melvin Hare was convicted of manslaughter and sentenced to two years and a fine of $500. Thompson’s charges were dropped as the prosecution decided she did not participate in the crimes.