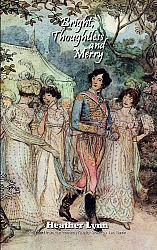 J.M. Barrie is a Scottish novelist and playwright who is best known for his 1904 play Peter Pan, or the Boy Who Wouldn’t Grow Up, which he later adapted into the children’s novel Peter and Wendy (1911). Barrie was ninth of 10 children and his father was a weaver. Barrie was shy and introverted and stood at just 5’3” tall. As a child, Barrie loved to read books and set his mind to becoming an author, which his family discouraged. Barrie worked as a journalist before publishing his first novel, Auld Licht Idylls, in 1888. Barrie’s comedy, Quality Street, opened in 1901 in Toledo, Ohio. It then ran for 64 performances on Broadway at the Knickerbocker Theatre and starred Maude Adams as Phoebe. In 1902, the play was performed at the Vaudeville Theatre in London and starred Seymour Hicks as Valentine Brown and Ellaline Terriss as Phoebe. Before his death in 1937, Barrie had written dozens of novels and plays and had a host of literary friends including Robert Louis Stevenson, George Bernard Shaw, H.G. Wells, Thomas Hardy, and Arthur Conan Doyle.