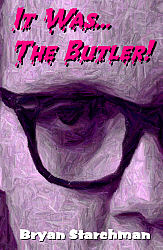 FARCE/MYSTERY. A murder-mystery series premiered on TV and would go down in history as the worst murder-mystery series of all time. It was entitled “It Was…The Butler!” And after an hour of murder, mystery, and mayhem, it turned out that, yes, the Butler had done it. Peter Piper vowed to grow up to be just like that detective on TV and rid the world of evil butlers. When a butler is murdered at the National Association of Butlers convention, Peter comes to one conclusion: The butler did it! Madcap missteps, quirky suspects, and pure hilarity abound as Peter investigates with the help of his trusty American sidekick, Watsonville.