Rednecks Bite Back, The 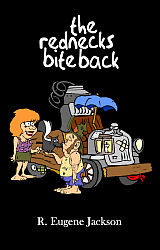 FARCE. After winning the lottery, a redneck, Heyweed Throttlebottom, moves into a mansion and becomes an insufferable snob who speaks with a fake British accent. To protect himself from “undesirable” neighbors, Heyweed makes plans to purchase the wooded lot next door. But before he can do so, a family of rednecks arrive and park their beat-up house trailer on the land. With country music blaring, the truck engine revving, and a whole lot of duct tape, this family of Bubbas soon make themselves at home—and with everyone in the family named “Bubba,” there ain’t no mistakin’ they’re Bubbas! Determined to force the Bubbas off the land, Heyweed hires the Blubber Team, a bumbling paramilitary group, to capture the Bubbas and relocate them. But the Blubbers are no match for the Bubbas’ secret weapon—Bubba Cousin!