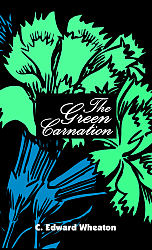 SATIRE. This play is adapted from the scandalous novel by Robert Hichens (1894), which satirizes fashionable London society and figures associated with the Aesthetic Movement, most notably Oscar Wilde. Mrs. Windsor invites a group of fellow Londoners to spend a week relaxing at her countryside estate. Among them are Esmé Amarinth and Lord Reginald Hastings, a couple of witty dandies who abhor bourgeois dictums and Victorian ideals of morality. Mrs. Windsor hopes to play matchmaker for her cousin Lady Locke, by introducing her to the clever, whimsical Lord Reginald Hastings. At first, Lady Locke finds Esmé and Lord Hastings’ ideas original, amusing, and a study in contradictions. But as she becomes better acquainted with them, Lady Locke discovers the dandies to be as artificial as the dyed green carnations they wear in their lapels.