Case of the Music Guild Murders, The 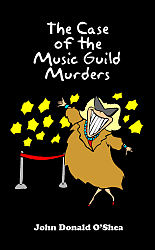 FARCE/MURDER-MYSTERY. It’s been a tough year for the River City Music Guild. Two directors have been murdered and now the body of a third director has been found poisoned, stabbed, strangled, and shot. The police chief and his detective soon narrow down the murder suspects to those with the motive and opportunity to commit the murder—the Music Guild’s stable of sopranos!