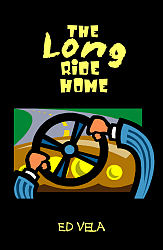 COLLECTION. There are plenty of comical conflicts and heartfelt moments in this wonderful collection of five short plays that depict the unique and timeless bond between stepfathers/fathers and sons. A little-leaguer suffers the agony of defeat when he loses the championship game for his team and realizes his father’s disappointment in “The Long Ride Home.” In “Head,” a father, in the midst of fixing the toilet, is taken off guard when his son decides to make a rather comical confession. In “Cecil Clarence Abernathy Explains It All to You,” a naïve boy reads a school essay to his classmates relating the events leading up to his parents’ divorce and how the new situation has turned into a real cash cow for him. In “Wine and Wafers,” Norman decides to break the news to his brother and father during communion that he has broken up with his girlfriend and is now dating a Jewish boy. And in “Step-Hell,” a teenager recounts the first time he called his stepfather “Dad” and the first time his stepfather called him “Son.”

Ed Vela is a national award-winning playwright whose plays have been produced throughout the U.S. Mr. Vela is also an accomplished actor who has more than 30 years of experience on the stage. He resides in southern California.