Pied Piper of Hamelin, The 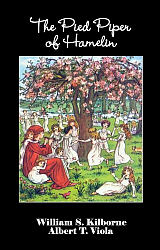 CHILDREN’S CLASSIC. This play preserves much of the original verse of Robert Browning’s poem but has been modified so that it can be performed by young actors. Hamelin is suffering a horrible rat infestation, and the Mayor hires the Pied Piper to rid the town of rats. The Pied Piper plays his magical flute and leads the rats away, but when he goes to collect his fee, the town officials refuse to pay him. To punish the town for its greed, the Pied Piper plays his flute and leads the children to a cave where they disappear. This play is easy to stage and is perfect for actors of all ages including young children.

Award-winning playwright, William S. Kilborne, is a poet, lyricist, essayist, and English instructor. Mr. Kilborne is a graduate of Yale University and earned his master’s degree from New York University. He has two children and two grandchildren.


Albert T. Viola (1942-2009) was an award-winning actor and playwright who appeared on Broadway, Off-Broadway, and in television and motion pictures. Mr. Viola also served as a faculty fellow in Mathey College at Princeton University.