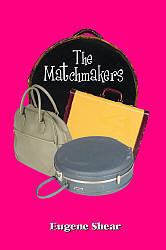 ROMANTIC COMEDY. Three single brothers—a firefighter, a mailman, and an accountant who carries around his dead wife’s ashes—arrive at a time-share for a relaxing weekend getaway and think they are in luck when they meet three single sisters staying in an adjacent time-share. The sisters include a no-nonsense bounty hunter, a cheerful nurse, and a Broadway costume designer and former actress who, when under stress, thinks she’s Cleopatra, Ophelia, or Blanche DuBois from “A Streetcar Named Desire.” Twists and turns abound as the brothers and sisters conspire to play matchmaker for each other by any means necessary even if it involves feigning infatuation or trying to make each other jealous. The drama never ends in this hilarious romantic comedy!

Eugene Shear is an award-winning playwright with acting and production experience. He draws on his profession of a psychiatric social worker to humorous effect in his comedies. Mr. Shear lives in Concord, NH, with his wife, Deborah, and two cats, Henry and Alice.