Rogues Along the River 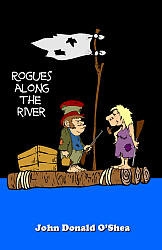 MELODRAMA. Phineas Fourberie, the villainous banker of Polecat Point, has hatched a plot to wed the virtuous Mary Goodperson so that he can reclaim his safe, which was washed downriver in a flood and is stuck in a muddy riverbank on Mary’s property. However, Phineas’ plan gets mucked up when a couple of Shakespearean actors arrive and concoct a scheme to con Phineas out of his money. But unbeknownst to them, Mary’s uncle has devised a plan to swindle the actors. And to top if off, two river folk arrive with their sights set on robbing the bank and running off with Phineas’ safe. In the end, with all the drama, double-dealing, and bad acting, there’s only one thing left to do—join forces, start up a repertory theatre, and perform melodramas. After all, there’s already a resident villain, a virtuous heroine, a charming curmudgeon, and a couple of river folk ready to play the comedic roles!