Santa and the Naughty Ninjas 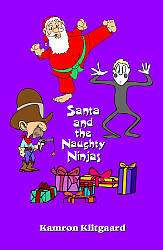 INTERACTIVE HOLIDAY COMEDY. The leader of a band of naughty ninjas is determined to seek revenge against Santa for having received a lump of coal for Christmas instead of a Red Radio Flyer Wagon (and Numchuck Ninja is in desperate need of an Easy-Bake Oven). So seven days before Christmas, the naughty ninjas arrive at Santa’s workshop at the North Pole and demand that Santa turn over all his toys to them when they return on Christmas Eve. Santa realizes his elves are no match for the naughty ninjas, so he sends his elves out to find seven heroes to help battle the ninjas and save Christmas. The elves venture forth and return with an odd assortment of “heroes” including an evil clown, a mime, a cowboy actor, a nerdy scientist, and a guy who likes to wrap himself up like a Christmas present. When the naughty ninjas return on Christmas Eve, the heroes and elves are easily defeated as they square off against the ninjas. It looks as though Christmas may be ruined until a bumbling elf unleashes his secret heroes. Audience members get to join in on the fun by playing a host of hilarious roles in this delightful, interactive holiday show.