Nosferatu: A Vampire Symphony of Horror 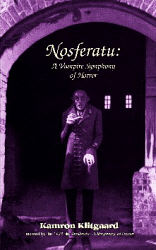 CLASSIC/HORROR. Inspired by the 1922 silent film Nosferatu: A Symphony of Horror. Thomas Hutter travels to Transylvania to deliver papers to the mysterious Count Orlok, who wishes to purchase a home in Wisborg, Germany. Hutter reaches Orlok’s castle, where he meets the strange Count and stays the night. The next morning, Hutter finds fresh puncture marks on his neck and discovers that Count Orlok has left and is already on his way to Wisborg. After the ship carrying Count Orlok and his dirt-filled coffins arrives in Wisborg, many townspeople mysteriously die and their deaths are attributed to a plague. But when Thomas’ wife, Ellen, reads The Book of the Vampires, she realizes that the only way to save the town is to willingly sacrifice herself to Count Orlok. As Count Orlok greedily feeds on Ellen’s blood, he suddenly hears a rooster crow and realizes that dawn has arrived. As he rushes to leave, beams of sunlight hit him, causing him to vanish in a puff of smoke. Easy to stage with minimal set pieces, this fast-paced play will thrill audiences.