Suddenly, a Shot Rang Out… 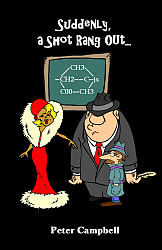 SPOOF. Audiences will love this hilarious film noir spoof. Lola Dusseldorf, a mysterious femme fatale, arrives in Chinatown at the office of Jack Fargo, a bumbling private investigator on the verge of bankruptcy. Lola has invented a plastics formula that will revolutionize the patio furniture industry and is on the run from the evil Colonel Wilberton, a spy dispatched by the Pan-Eurasian Petrochemicals Company to steal the formula. Colonel Wilberton is prepared to do anything…even employ one of the most hideous forms of torture known to man involving castor oil and a feather to obtain the formula. But before Lola and Jack can even leave the office, Colonel Wilberton arrives with his hulking bodyguard, a feather, and a bottle of castor oil. It doesn’t take long before Jack and Lola put two and two together and realize they are in a real slippery situation!

Peter Campbell has written several plays, some of which have been performed in professional theatres. Mr. Campbell attended Pennsylvania State University and Syracuse University and has worked as a newspaper reporter, magazine editor, and speechwriter. He is a member of the Dramatists Guild of America.