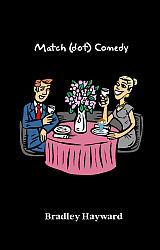 COMEDY. Trevor has finally decided to tie the knot with his girlfriend, so he invites her to a swanky restaurant to propose. But just ten minutes after she accepts, Trevor gets cold feet and decides he wants to date other women. In the restroom, Trevor secretly posts a personal ad on Match-dot-com and soon an odd assortment of women arrive at the restaurant including a church lady who has never been on a date, a bossy single mother, a woman seeking revenge, a high-strung therapist, and an elderly cat lady. With six women on his hands, Trevor may have finally found his match!