Santa Lives! Yes, Virginia, There is a Santa Claus 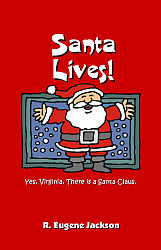 CHILDREN’S HOLIDAY. Inspired by the 1897 editorial “Is There a Santa Claus?” audiences will love this modern, heart-warming comedy. While holding auditions for “Little Red Riding Hood Saves Santa Claus,” students who don’t believe in Santa Claus protest the school’s holiday play and the principal cancels it. Soon, even Virginia, the third-grade author of the play, begins to doubt if Santa Claus exists. Virginia’s father suggests she write a letter to The New York Sun asking if Santa is real. Not only does Virginia get a response from the newspaper, but she gets a surprise visit from Santa himself, prompting the school to give Virginia’s play the green-light. With the holidays quickly approaching, Virginia has to adapt her play to the “talent,” props, and costumes available, including a Red Riding Hood with no red hood, a Santa who doesn’t have a Santa suit, and the addition of tuba and drum “music.”