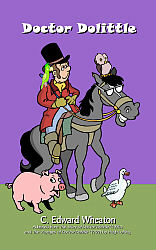 CHILDREN’S CLASSIC. Adapted from The Story of Doctor Dolittle and The Voyages of Doctor Dolittle by Hugh Lofting. There are rabbits in the pantry, hedgehogs in the cellar, and even a crocodile under the bed! Doctor Dolittle, a small town doctor, loves animals and has learned how to talk to animals with the help of his pet parrot, Polynesia. However, the Doctor’s animal menagerie is scaring away all of his human patients and he is running out of money. One of the villagers convinces the Doctor to become an animal doctor instead of a human doctor, but when the Doctor takes in too many animals in need of help, even his own sister gets fed up and leaves. With no one left to perform household chores, Doctor Dolittle’s animals band together to do the laundry, mending, cooking, sweeping, and dusting. Then one day, the Doctor is visited by the Purple Bird-of-Paradise, who informs him that many villagers on the Island of Noe are dying of a strange sickness and need his help. Soon the Doctor sets sail to the Island of Noe, where he encounters the Pushmi-Pullyu, a rare two-headed creature, and hitches a ride on a giant glass sea snail before returning home to his beloved village of Puddleby-on-the-Marsh.