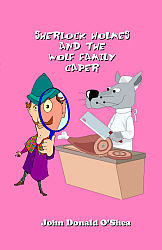 INTERACTIVE CHILDREN’S MYSTERY. In this adorable “Law and Order” type mystery, the audience is called upon to help out Sherlock Holmes and his sidekick, Dr. Joan Watson, solve the mystery of “The Wolf Family Caper.” Holmes and Watson are investigating the mysterious case of two missing pigs. Not only have the pigs disappeared, but a straw house and a stick house have vanished as well. Just when Holmes and Watson begin to think they have a serial house-napper on the loose, they discover a single paw print at the scene, which gives rise to the Huff-and-Puff Theory. Suspecting a wolf may be the culprit, Holmes and Watson pay a visit to Ezekiel Wolf, the owner of a pork processing plant. When the duo suggests that a wolf may have huffed and puffed and blew the houses down, Mr. Wolf’s hair bristles at the theory, and he insists that such stories are just old wives’ tales. And, besides, he suffers from emphysema. As Holmes and Watson continue their investigation, they discover that all clues lead back in some way to the Wolf Family Picnic Extravaganza…