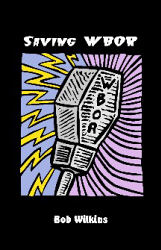 COMEDY. Winner, McLaren Memorial Comedy Playwriting Competition, One-Acts, 2008.. WBOR is a small family-owned TV station that is having trouble competing with cable and satellite companies. Deeply in debt, the station’s owner announces plans to sell the station, ending its unique programming lineup including Leonard’s cooking show segments on how to properly cook roadkill and the “The Mildred Show’s” trivia segment, which highlights “important” facts like where Germans used to hide their lost teeth and how much an African ostrich egg weighs. Desperate, Lenard and Mildred cook up a scheme to save their beloved station, but an investor who wants to buy the land is determined to foil their plans.

J. Robert “Bob” Wilkins is a producer, director, and award-winning playwright who has produced and directed more than 40 plays. As a teacher at a small rural junior/senior high school, Mr. Wilkins discovered a passion for theatre and began writing plays in 1997. Since then, a number of his plays have been published and produced.