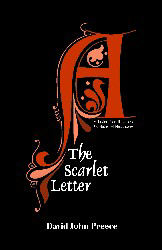 CLASSIC. Adapted from the 1850 novel by Nathaniel Hawthorne. After having an affair with Rev. Dimmesdale and giving birth to his daughter, Hester Prynne is led to the town scaffold where she is publically shamed and is forced to wear a scarlet letter “A” on her chest. Rev. Dimmesdale, who does not have the courage to confess to the affair, becomes the target of revenge for Hester’s husband, who mercilessly torments Dimmesdale until he is overwhelmed with guilt and develops a heart condition. Alarmed at Dimmesdale’s rapid demise, Hester convinces him to sail to Europe with her and Pearl so that they can start a new life and become a family. But before they can flee Boston, Hester discovers that her husband has learned of her plan and has booked passage on the same ship.