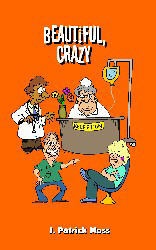 COMEDY. To woo Alicia, Jim tells her that he is a director and can get her the lead role in an upcoming play. Jim convinces his roommate to stage his “play” in the psychiatric wing of the hospital, where she works as a nurse. When Alicia arrives at the psychiatric ward, Jim tells her that the psychiatric patients are method actors and are all part of the play. Alicia meets her fellow “cast members,” who include a catatonic woman, a pathological liar, a patient with multiple personalities, and an autistic savant. But when a nurse supervisor, a security guard, and the hospital’s regional director arrive, the patients have to play sane and the sane have to play crazy. What ensues is an evening of full-blown madness!

J. Patrick Moss is a diamond coach in the National Forensic League, the director of forensics at two high schools, and serves on the executive boards of three regional forensic leagues. Mr. Moss also writes, directs, and acts in plays for his school’s theater troupe. Mr. Moss is a native of Rutherford County, NC, where he lives with his two daughters.