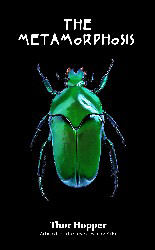 CLASSIC. Adapted from the novella by Franz Kafka. Absurd, surreal, nightmarish, complex, illogical, humorous…this play defines “Kafkaesque.” Gregor Samsa, a traveling salesman, wakes up one morning and discovers that he has transformed into a monstrous beetle. His family views his metamorphosis as with shame and disgust. Gregor, who is the sole provider for his family, is now unable to work and has become dependent on his family to care for him. Gregor’s father and his younger sister, Grete, are forced to get jobs and the family takes in boarders to make up for the loss of Gregor’s income. As time goes on, Grete comes to resent her role as Gregor’s caretaker and convinces her mother and father that Gregor is a burden that the family needs to rid themselves of once and for all. This adaptation remains true to Kafka’s original work and remains one of the most important works of fiction in Western literature.

Stephen Murray has been a performing arts educator for more than 30 years. He holds a Doctorate of Musical Arts from Boston University. His plays and musicals have been performed throughout the United States as well as in Canada, Germany, South Africa, Singapore, Malta, Australia, and Japan. He received the Anna Zornio National Children’s Playwriting Award and won the Columbia Entertainment Company National Playwriting Contest. Dr. Murray is also a director, conductor, performer, and songwriter.