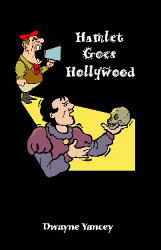 INTERACTIVE FARCE. Determined to make Hamlet a Hollywood blockbuster, a director elicits the help of Shakespeare to make a few “minor” changes to the script. Thinking the original script is trite and cliché, the director orders the cast to perform Hamlet as a zombie movie, a spy thriller, a puppet show, a science fiction movie, a home improvement show, a feminist movie, a western, a police drama, a vaudevillian/juggling show, a Broadway musical, an opera, and even a kung fu action flick. As the director swaps costumes and characters, chaos on the set intensifies when Ophelia insists on brandishing a sword, Laertes vies for a bigger part, and Shakespeare transforms himself into a rapper! This play is a fun way to introduce the story of Hamlet to students, and the even audience can join in on the fun!

Dwayne Yancey has published several plays and some of his works have been produced in New York by professional theatres. Yancey lives in the Blue Ridge Mountains with his wife and two children, all of whom are veterans of the community theatre stage.