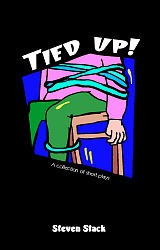 COMEDY COLLECTION. The characters in this short play collection find themselves hopelessly stuck in wildly absurd situations. In “Squatters’ Rights” a teenager tries to rid herself of two annoying ghosts who refuse to move out of her bedroom and think it’s hilarious for real ghosts to wear sheets. In “Bessie Brooks and Tommy Snooks” two nursery rhyme characters decide to update their boring nursery rhyme by going off-script. In “Mumford E. Squirrel in ‘How to Ask a Girl Out,’” a boy who has difficulty talking to girls calls upon his guardian squirrel to help him woo a girl. And in “Tied Up,” a woman who is about to be run over by a train tries to convince a passerby to untie her before it is too late.

Steven Stack has been involved with theatre for more than 20 years as a writer, actor, and instructor. Mr. Stack has written and directed several full-length plays, one-acts, and scenes for several theaters, performing arts schools, and professional organizations and is currently the lead playwright for Jigsaw Entertainment. He resides in Mount Horeb, WI.