Princess and the Goblins, The 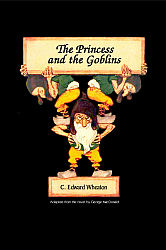 CLASSIC. Adapted from the novel by George MacDonald. Lost in the forest, Princess Irene finds herself surrounded by goblins but is rescued by a young miner who knows how to drive goblins away—by reciting poetry and stomping on their feet! Poetry hurts the goblins’ ears, and since they can’t wear shoes, they aren’t too happy to have their feet stomped on. They also hate taxes, so much so, that when the King imposed a tax hike, the goblins went to live in subterranean caverns. The goblins have vowed to seek revenge on the King and annoy the aboveground people any way they can, especially the miners who are constantly digging tunnels, forcing them to relocate their homes. Anxious to take revenge on their human neighbors, the Goblin King hatches a plan to flood the miners’ mines and to kidnap Princess Irene and force her to marry his son, Prince Flint. An adorable play that is sure to delight your audience!