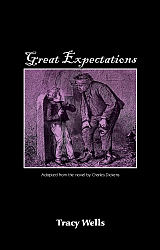 CLASSIC. Adapted from the novel by Charles Dickens. Pip, a young orphan, lives with his abusive sister and her husband Joe Gargery, a blacksmith. While visiting the graves of his parents, Pip encounters an escaped convict who asks Pip for food and a metal file to saw off his leg iron. Pip obeys, but the convict is soon captured. Years later, Pip is taken to Satis House, where the wealthy, reclusive, eccentric Miss Havisham has arranged for Pip to play with her adopted daughter, the beautiful but haughty Estella. After her fiancé jilted her on their wedding day, the now elderly Miss Havisham still wears her old wedding dress and keeps all the clocks in her house stopped at the same time. The house has been left as it was on her wedding day and even the old wedding cake is still on the table. When Pip meets Estella, she treats him coldly and contemptuously, but he falls in love with her and dreams of becoming a wealthy gentleman someday so that he may marry her. One day, a London lawyer, Mr. Jaggers, appears and informs Joe Gargery that Pip has “great expectations.” A secret benefactor has given Pip a large fortune and Pip must go to London to begin his education as a gentleman. Overjoyed, Pip assumes Miss Havisham must be his benefactor and that she intends for him to marry Estella. As Pip becomes gentlemen, he deserts his true friends but is humbled in the end when he discovers the true identity of his benefactor.